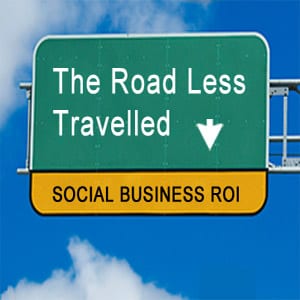 In 2006, most companies believed that Social Media was nothing more than a passing fad. And as with most disruptive technologies or business models in the early stages, there was no ROI in sight. But some companies began experimenting with Social Media and started to see its potential for new sales, marketing and support channels. And the revolution began.

Just a small group of companies and dedicated people, let’s call them Social Starters, got Social Media going. Mostly, Social Starters came from marketing and customer support areas. They started out by simply monitoring customer comments and feedback. Social Starters often became team leaders when social teams were eventually put into place. Many of the first teams started focusing on specific Social Media channels; instead of experimenting with numerous ones like the Social Starters did at the very beginning. Since different channels can produce different results for different organizations, this more focused approach resulted in more measurable results and they were encouraging. Soon, Social Media policies and procedures became more formalized and standardized including training and tools. With that, social teams were better able to determine how Social Media added to the value of the business.

Over time, more measurable and positive results started to come in. It became the norm for companies to listen and interact with the customer and as a result they were seeing an increase in satisfied customers, more traffic to their Websites and social channels, and an increase in sales and repeat customers; all directly attributable to Social Media initiatives. We were starting to see solid results of Social Media contributing to Business ROI. And as the results became impossible to deny, not only did all levels of the organization became more accepting of Social Media — the highest-level company executives became public advocates. Companies started to think of, and refer to, themselves as Social Enterprises.

Today, a true Social Enterprise listens to and considers customer concerns a top priority. It can anticipate customer needs, and market and promote products far quicker than ever before. Customer satisfaction and loyalty is at an all-time high. Customers remark that their needs are anticipated and their ideas are influential. Employees are more productive, stakeholders are more engaged and campaigns are more efficient since there is no guess work on what customers want and need. This is a major breakthrough for enterprises of all shapes and sizes, including cause companies, non-profits and other business organizations both public and private. And, probably most important of all, today’s true Social Enterprise relates to its social communities as real people: customers, employees and stakeholders; instead of just a way to make a profit. Although the disruption and revolution phases are almost over and Social Business ROI is getting stronger, there’s still more to do.