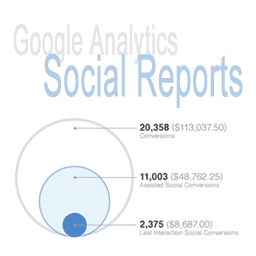 The main reason that social media is so hard to measure is that most social interactions occur off of the business’ website. For example, there may be a vibrant and active Facebook community having constant conversations about a business product, but all these conversations are happening off of the main business website, which means that Google Analytics can’t track what the end result of that conversation is – until now. Google Analytics with Social Reports attempt to bring together social actions that are happening on the website with social actions happening off the website to provide marketers a more accurate, complete picture of business ROI.

Let’s imagine that Sally is a woman in her mid-twenties who follows her favorite vintage clothing store on Twitter and Facebook. On Monday, she sees a tweet on her smartphone about a new sale on go-go boots. Intrigued, she clicks the link and scrolls through the pictures. She’s on her lunch break, though, so she doesn’t have time to do anything more than look.

A few days later, Sally is still thinking about the go-go boots and goes back to the site. This time, she happily places an order for a pair of bright red, knee-high go-go boots.

Google Analytics with Social Reports also provides a measurement called “Last Interaction Social Conversions.” This means that the action the user took immediately preceding a conversion was a social action. For instance, if Sally had clicked on the link in the tweet and immediately purchased the go-go boots, this would have been counted by Social Reports under the “Last Interaction Social Conversions” header.

Social Reports: Which Social Network is Boosting Your Business?

Another feature of the Google Analytics with Social Reports is the ability to compare and contrast the value of one social channel to another. For example, Sally’s favorite vintage clothing store tweeted about the sale on go-go boots, but they also might have posted a photo album of boots on their Facebook page, as well. When the store’s marketing team examines the results in Social Reports, they might find that the tweet led to 20 conversions, while the Facebook photos yielded 60 conversions.

Which social media channels will Google Analytics with Social Reports enable marketers to better track? To name a few:

Except for Facebook, these are the biggest names in Google’s Social Data Hub Partners, but there are more and Google intends to keep growing the list. As of right now, Facebook is not a Social Data Hub Partner, which means that Google can’t provide as much drill-down data to its Analytics users for Facebook as it can, say, with Reddit. Even though the drill-down information for Facebook is not available, the new social tracking still improves ROI data, especially when marketers combine information from Analytics with Facebook Insights.

How to Get Started with the New Social Reports

Google Analytics first started to offer basic social reports back in the summer of 2011. This was the time when you might have noticed that the look/feel of your Google Analytics page shifted. At that time, you should have updated the Google Analytics code on your website. If you didn’t, installing that code is the first step to better social media reporting.

We’d like to hear your thoughts on Google Analytics Social Reports, Social Business ROI or Social Media – the good, the bad and the ugly. Share them in the comments section below.