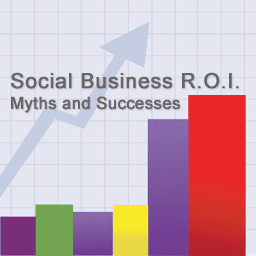 Facebook is the 850 pound gorilla of social media. With over 850 million active users, Facebook is rapidly closing in on being used by one in every seven people on the planet. From subsistence farmers in rural Africa accessing Facebook on their mobile phones, to tweeting protestors in the Middle East, to grandmothers living in Michigan sharing their family photos on Flickr, it seems that almost everyone is living a part of their life on a social network.

In some of our more recent articles, we’ve been writing about Social Business ROI and that enterprises typically achieve highly desirable business outcomes through carefully planned and executed social channels.

Some business people take this question even further, asking the more cynical “Is there a return on social media, or does social media have more marketing bark than bite?”

Some social media marketing myths still persist despite the growing understanding of how to use the new marketing channels. Here are three of them.

Signing up for a Facebook page or a YouTube channel may be free, but that doesn’t mean social media is. At the very least, successful social media content still takes time to plan and develop, and someone in the business is being paid for that time. However, the good news is that once a social media marketing strategy has been decided upon and people have been allocated to the project, the cost of social media remains relatively flat, while profitability increases over time. Whether or not profitability happens, though, totally depends upon the success of the social media campaign.

Although marketers are still learning how to measure the ROI of social media efforts, stating that the monetary value of a social media campaign cannot be measured at all is not true. As you will see in the next section of this article, many businesses are already successfully measuring the dollar-value of their social initiatives.

Want to see some recent concrete examples of businesses who are measuring the results of their social media campaigns? Try these on for size:

3. Paramount Pictures’ #Super8Secret (hashtag) Promoted Trend created a tremendous spike in conversations: Tweets of the hashtag reached nearly nine million impressions in less than 24 hours and mentions of the movie skyrocketed to more than 150 per minute. Receipts for the sneak preview exceeded $1 million, and Paramount said weekend box office surpassed expectations by 52%. [2]

5. Sprint’s monitoring of online conversations about their brand enabled them to tweak their social media campaign messaging. As a result, the company says it picked up an extra $133 million in revenue. [4]

These are just six examples of hundreds of big brands that are successfully measuring the real financial impact of their social media initiatives. If you want to explore these and other examples, contact 4thWeb.

Do you have your own social business or social media ROI story or thoughts? Share it in the comments section below.