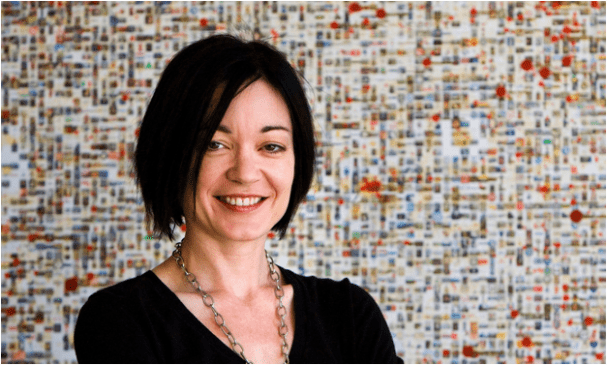 There are many unsolved mysteries in this world, and one of these is the question, “Did the 18th century French philosopher and creator of the world’s first encyclopedia roll over in his grave when Sue Gardner adopted his name?”

It was a late night session at Wikipedia when the Sue Gardner Diderot joke started.

To understand it entirely, you have to understand that the folks who operate Wikipedia are geeks, yes, but they’re also nerds. A geek like Zuckerberg can easily enough come up with his famous business card phrase, “I’m the CEO… bitch”, but it takes true nerds to turn that into “I’m Diderot… bitch”.

“Diderot” is what Wikimedia Foundation executive director Sue Gardner is calling herself these days. She found it so amusing that she had stickers emblazoned with the phrase made up for everyone in her San Francisco office. Her own Diderot sticker is plastered onto the top of her computer screen.

The Power Behind the Throne

It was about 1750 when Denis Diderot came up with the idea for the encyclopedia. He’d been asked to translate a dictionary, of sorts, into French. Instead of a simple translation, he convinced printer Andre Le Breton to publish a book that would incorporate every active idea of the time, from art and philosophy to science. The two raised enough money to print the ambitious work, but the ruling classes were threatened by the radical idea of providing such information to the masses, and the project was stopped in 1752. It took Diderot another 20 years before he could finally finish his project.

Fast forward a couple hundred years to the founding of Wikipedia by Larry Sanger and Jimmy Wales. Though Wikipedia drew a little controversy, mostly in the form of grumbling “experts” who felt that an open encyclopedia would dumb-down the formerly elitist world of knowledge, the problem for Wikipedia has long been the opposite of Diderot’s problem. Whereas Diderot had enough money for publishing his work but not enough support, Wikipedia has enjoyed plenty of support, but has been rather short on the funding side of the equation.

That’s how Sue Gardner got her job with the Wikimedia Foundation in 2007.

For his part, Wales is content to be the poster-boy for Wikipedia with no day-to-day role in the site’s operation; today, it is Gardner who is the real power behind the throne.

The Changes at Wikimedia

When Gardner took over in 2007, the whole Wikipedia operation consisted of seven people in a Florida strip mall. To say that the foundation was strapped for cash would be quite the understatement.

Gardner went to work. First, she moved the company from Tampa Bay to San Francisco. Next, she added almost fifty full-time staff members, and laid plans to add forty more. Under her direction, the Wikimedia Foundation stopped being one of those small non-profits where everybody hangs out in their socks all day at work, and became a real, actual, professional organization. Her biggest feat to date was raising $16 million in just 50 days in late 2010. All this for a foundation whose previous idea of fundraising was “Where can we come up with $1,500 for a new laptop?”

Looking Ahead: Sue Gardner Plans for the Future of Wikipedia

A Canadian woman of Asian descent, it bothers Gardner that most of the site’s writers are still white men. Women are very outnumbered, and so are people from outside Europe and the US. Not only does Gardner want to double the size of Wikipedia’s users from 500 million to 1 billion by 2016, she also wants these new users to be men and women from the developing world. To this end, she’ll be opening new Wikimedia offices in North Africa, the Middle East, Brazil, and India.

Her strategy makes sense, given that the number of people living in these regions well-outnumbers Europe and the United States. In other words, reaching out to the developing world is probably the only way Wikipedia will grow to 1 billion users, a fact Gardner seems to intuitively understand.

India tops the Wikipedia growth wish-list for Gardner, and not just because she spent a few weeks on a silent meditation retreat there recently. She might be cool, but she’s also practical, and she’s well aware that India is the fastest growing internet market in the world right now.

Wikipedia isn’t the only site setting up shop in India; Facebook’s world-domination scheme has recently taken them to the subcontinent, as well, and China might not be far behind. Facebook’s office opened in Hyderabad, India, in September 2010. However, while Facebook plans to hire about 500 Indians for their operation, Gardner wants to start with something more like 5. Still, it will be getting a foot in the door that Gardner hopes will eventually lead to an even broader expansion of Wikipedia. In the future, she wants to see more Tamil-language pages, Malayalam-language pages, and a host of others – she wants the whole world at the table as Wikipedia consolidates the world’s knowledge and history.

In all, it seems like Denis Diderot isn’t really a good comparison for Sue Gardner. Diderot was ambitious, but never global. He valued ideas, but only the ideas of the most well-recognized minds of the Renaissance – all well-to-do white males. Gardner is far more populist than the 18th century European thinker ever could have been. A better comparison of Gardner might be something like this: Take Trinity from The Matrix, and mix her together thoroughly with Karl Marx. Then add just a dash of Oprah Winfrey’s best kumbaya moments, and stir in the entrepreneurial common sense and ruthless bootstrapping of someone like Cornelius Vanderbilt. Once you’ve got this mix together, you might just wind up with a Sue Gardner. Diderot, for his part, can just rest in peace.

Sue Gardner is helping Wikipedia steer in the right direction.