Home » Lebron, Wade and Bosh: 10 Things every Business can Learn about Teamwork from the NBA 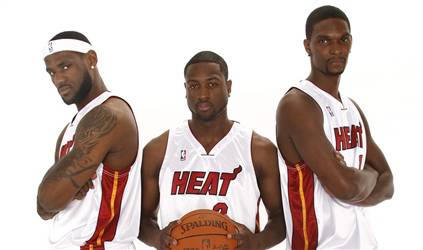 The Miami Heat’s LeBron James, Dwyane Wade and Chris Bosh have been referred to as the “Big 3,” and NBA observers everywhere are watching this year’s playoffs carefully, preparing to pass judgment on whether it’s a match made in heaven or an utter disaster. Not since the magical pairing of Scottie Pippen and Michael Jordan in the mid-90s has there been so much hype in the NBA about a group of superstars like LeBron James, Dwyane Wade and Chris Bosh.

It’s often the case that the world of sports provides us with insights about the world of business, especially when it comes to metaphors about teamwork, management, and talent, and the trio of competitive superstars from Miami, LeBron James, Dwyane Wade and Chris Bosh, certainly have plenty of lessons for competitive superstars in business. Based on what’s happened so far for the Miami Heat, here are the top ten lessons we can apply to business by learning from the trials and tribulations of the Big 3.

The Miami Heat worked hard to get Lebron James, Dwyane Wade, and Chris Bosh onto the same team

Many people speculated when the three players came together, they would be unstoppable. Yet an abundance of talent does not a successful team make, and this is a lesson that in the world of business has been learned the hard way.

Remember Enron? No company believed in fostering talent more than the failed corporate giant. As author Malcolm Gladwell wrote in the New Yorker, the “talent mind-set” has become an intrinsic part of American business’ Jedi code – as it is in the NBA. At Enron, star employees were encouraged to take dramatic risks, without having to consult with pesky bosses. What seemed like a “good idea at the time” led to unbridled narcissism and self-promotion that put personal interest over the good of the larger team. In time, Enron crumbled as a result of its policy of promoting star players over star teams (Source: Gladwell.com).

In short, team will trump talent every time, and the NBA has proven this again and again. In 1992, America put together a “dream team” of NBA stars to compete in the Olympics. The Dream Team easily sailed to a gold medal, but the rest of the world didn’t sit idly by for subsequent Olympics. After years of racking up gold medals, a smug men’s basketball team was upset in 2004.

In 2008, the men came back. Duke’s Coach K, famous for work ethic and team play, brought together superstars again and forged them into a winning team, despite the fact that the competition in the Olympics had gotten a lot stiffer since the early 90s. Coincidentally, the year the USA team took back the gold medal was the same year that James, Wade, and Bosh wore the same jerseys for the first time.

The Miami Heat’s coach Erik Spoelstra reported that after the one-point loss to the Chicago Bulls in early March, some of the players actually teared up in the locker room. Some NBA observers and members of the media had a good laugh at that – imagine the 6′ 11” Chris Bosh, and the heavily tatted LeBron James and Dwyane Wade crying together in the locker room.

The critics can laugh all they want, but sometimes failure is a much better teacher than success. It took some of the Miami Heat’s big losses to teach LeBron James, Dwyane Wade, and Chris Bosh how to come together as a team.

In the book How the Best Leaders Lead by Brian Tracy, the author recounts how IBM’s founder, Thomas Watson, chose not to fire a vice president after the young executive made a $10 million mistake. When the young man humbly went to resign, he told Watson that he didn’t need to be fired, he would go peacefully, to which Watson replied, “Why would I fire you? I’ve just spent $10 million on your education. Now, let’s talk about your next assignment” (Source: How the Best Leaders Lead).

Coach Spoelstra wanted the Miami Heat to come together like the soldiers in the Band of Brothers series. He took them to a military camp for pre-season training, gave them t-shirts that said “Heat Troops”, and had them spend every waking moment together. Was it all for naught? When the season opened, LeBron James, Dwyane Wade, and Chris Bosh and the rest of the team didn’t perform as anticipated, and it disappointed everyone, including the coach.

Perhaps the Chicago Bulls can help explain these early failures. Even with Jordan and Pippen leading the team, it took the Bulls four years to win the NBA championship. In other words, building a strong team takes time, and management needs to understand that one corporate retreat isn’t enough to solve every teamwork woe.

#6. There’s always five players on the court, not three.

The one thing superstars and proponents of superstars forget is that basketball is a game played with five players on the court at any given time, not three. Additions like Zydrunas Ilgauskas, who played with Lebron James in Cleveland; Udonis Haslem, who’s played with Dwyane Wade since 2003; and Mike Miller, Haslem’s former college roommate, are all key parts of the Miami Heat team, even though their roles happen more “behind the scenes.” These players are the Miami Heat’s glue, holding everyone together on and off the court.

Although there are five players on the court at any given time, basketball teams can only have one point guard at any given moment.

Of the Miami Heat’s 93-88 loss to the Knicks, Steve Kerrr, General Manager of the Phoenix Suns, made this comment: “[ Lebron James and Dwyane Wade ] had no idea, and the team had no idea, how to function under pressure. It was ‘I’m so talented, I’ll take over.’ They looked awful” (Source: Fast Company).

For a team to function properly, everyone has to know his or her role on that team, and play it well without interfering with the roles of others.

#4. On a team, difference works better than sameness.

Likewise, these different roles are different for a reason – it’s necessary for teammates to specialize in different areas. When teammates have the same skill sets instead of complementary ones, the team as a whole suffers.

Lebron James and Dwayne Wade are perfect examples of skill sets that are almost too similar. As one commentator noted, “LeBron James and his sidekick Dwyane Wade are the exact same players… [the Miami Heat] is a team of redundancy” (Source: NPR.org). It is the differences between teammates, rather than the similarities, that help the whole unit win.

#3. Sergeants, CEOs, and NBA coaches are on the team, too.

We’ve spent points ten through four talking about Lebron James, Dwyane Wade & Chris Bosh and their talent, but how does management factor into a successful team?

Coach Erik Spoelstra has definitely had a hard time finding his niche. A relatively new, young coach, outside observers often wonder if he’s really in control of the team. Do LeBron James, Dwayne Wade, and Chris Bosh believe in him? Do all the players believe in him? A band of brothers is only as strong as their sergeant, someone they can confidently follow into battle.

When forming a team, it’s important to remember that a good leader can bring out the best in the talented players, and the talent in the worst players. Under a bad coach, however, even the most talented team can’t succeed.

Spoelstra has commented that “All players want to be coached” (Source: Fast Company). From his mentor Pat Riley, who is sometimes seen as the power behind the throne in the Miami Heat club, Spoelstra states that he’s learning to manage personalities rather than plays. Wise leaders in business will learn the same lesson — that leadership is less about policies and more about who’s executing the policies.

AND, #1. The sweetest victories happen when a team comes together.

In 2008, the men’s Olympic basketball team walked together to the podium to receive their gold medals with their elbows locked together. Tears were in many of their eyes as the national anthem played.

Nothing feels better than being part of a championship team. When a team plays like a well-oiled machine, moving together as one unit, passing and shooting as if they can read one another’s minds, there is no feeling more satisfying.

Perhaps it was the chance to play together on a championship team again that brought Lebron James, Dwyane Wade & Chris Bosh together. After all, each player could have gotten more money elsewhere. Instead, perhaps it was the chance not for personal stardom, but to be one part of something truly special, one piece of a much larger puzzle, that convinced Lebron James and Chris Bosh to join Dwyane Wade in Miami.

Business leaders should take note of what Lebron James, Dwyane Wade, and Chris Bosh already understand: Individually they’re powerful, but working together as a team, they will eventually live up to the billing of being unstoppable.