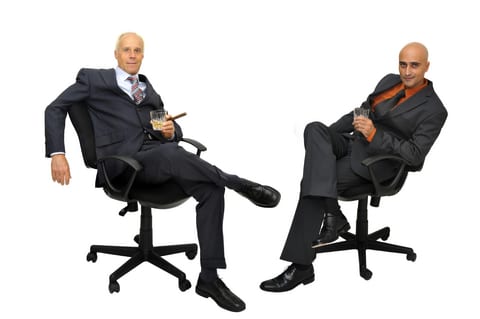 Executives don’t have time to watch online videos. They’re too busy shouting things like, “Buy! No, no – sell, SELL!” They have golf games to attend to. Conference rooms to design. Coffee to ask their secretaries for. Meetings to call – lots and lots and lots of meetings.

If this is what you think C-level executives are up to, well, you’d be right. However, you’d be wrong about not having time to watch online videos. Yes, that’s right: C-level executives – the Chief ____ Officer – are slumming around on YouTube just like the rest of us. Not only are they hanging out in those low-brow corners of the internet, they’re hanging out there more often than ever before.

This interesting fact is brought to us by a new joint research study conducted in December 2010 by Google and Forbes Insights. Among other things, the survey revealed that an astounding 83% of senior-level executives watched more online video in 2010 than they did the year before.

How Senior Executives are Using Video

The difference between a senior executive visiting YouTube and her teenage son visiting YouTube lies within the “what” and the “why”. While the son might be watching music videos, his COO mother is tuning in to YouTube channels not for entertainment purposes, but to research business-related information.

For the time being, the Forbes and Google survey showed, senior execs still prefer text to video. However, this is changing quickly. Already, close to a third of executives under 40 prefer to receive business-related information in the form of online video rather than online text.

Surprisingly, their elders feel the same way – another 31% of executives 40 and older also prefer video to text. Therefore, the notion that it will take several more years for video to dominate the web, as digital natives in their 20s and 30s move up the corporate ladder, is probably misguided. Older executives are already using video to make business decisions, and they’re doing it in increasing numbers.

What should be very interesting – and exciting — to vendors and any B2B marketers who target C-level executives is what the executives are doing after they view a video. A full 65% of senior executives reported that they have visited a vendor’s website after seeing an online video; 42% report that they made a business-related purchase thanks to an online video.

Not only do business executives have to watch vendor ads when they are viewing another video, they are actually responding to them quite positively. More than a third of executives say that they have contacted a vendor at some point after seeing an ad that showed up in an online video. Almost 70% say that they are comfortable watching the in-stream advertising.

Better yet, the percentage of executives who don’t mind watching “must-watch” online ads is higher the younger the executive is, indicating that in-stream ads will be more and more acceptable to executives as time goes on.

C-level executives are watching videos, then sharing the ones they like with their colleagues. More than 40% of executives say that they have shared online videos with colleagues; they are receiving links from their colleagues at about the same rate. Watching business-related videos on Facebook is a little bit lower percentage – a total of 33% — but if you look at the under 40 group, this number jumps to 52%.

Where else are business executives watching videos? Perhaps it isn’t surprising to find out that the place they watch videos most often isn’t YouTube but on business-related websites. Nevertheless, more than half of the executives are spending time on YouTube watching video related to their job.

What This Means for Marketers

In case you’re a little slow to catch on, what all of this means for marketers is that online video is poised to explode in 2011. No longer the domain of college kids and home videos, social media marketing with video on YouTube, Facebook, and elsewhere is reaching everyone, even the most powerful people in business.

Marketers can no longer afford to avoid video, any more than they can avoid having a website or a Facebook page. As technology continues to progress, business executives are going to be shouting “Buy!” and “Sell!” based on an online video they saw. They’re going to show colleagues and clients videos on their iPhone on the golf green. They’re going to pull out their laptop in the conference room and show an online video at one of their infernal meetings. In the airport, on the subway, in the back seat of their limousine, business executives are going to be consuming more online video than ever before, and they’re going to use what they see to guide their corporation’s business decisions.