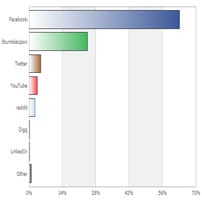 As of the end of June, 2012, Facebook dominates with over 900 million users who spend the most minutes per month on the site – typically over 400. Most users are ~60% female except for LinkedIn that’s ~60% male.

Stats are based on aggregate social media and other data collected by StatCounter on a sample exceeding 15 billion pageviews per month.

For more articles and information on Social Media, click here.