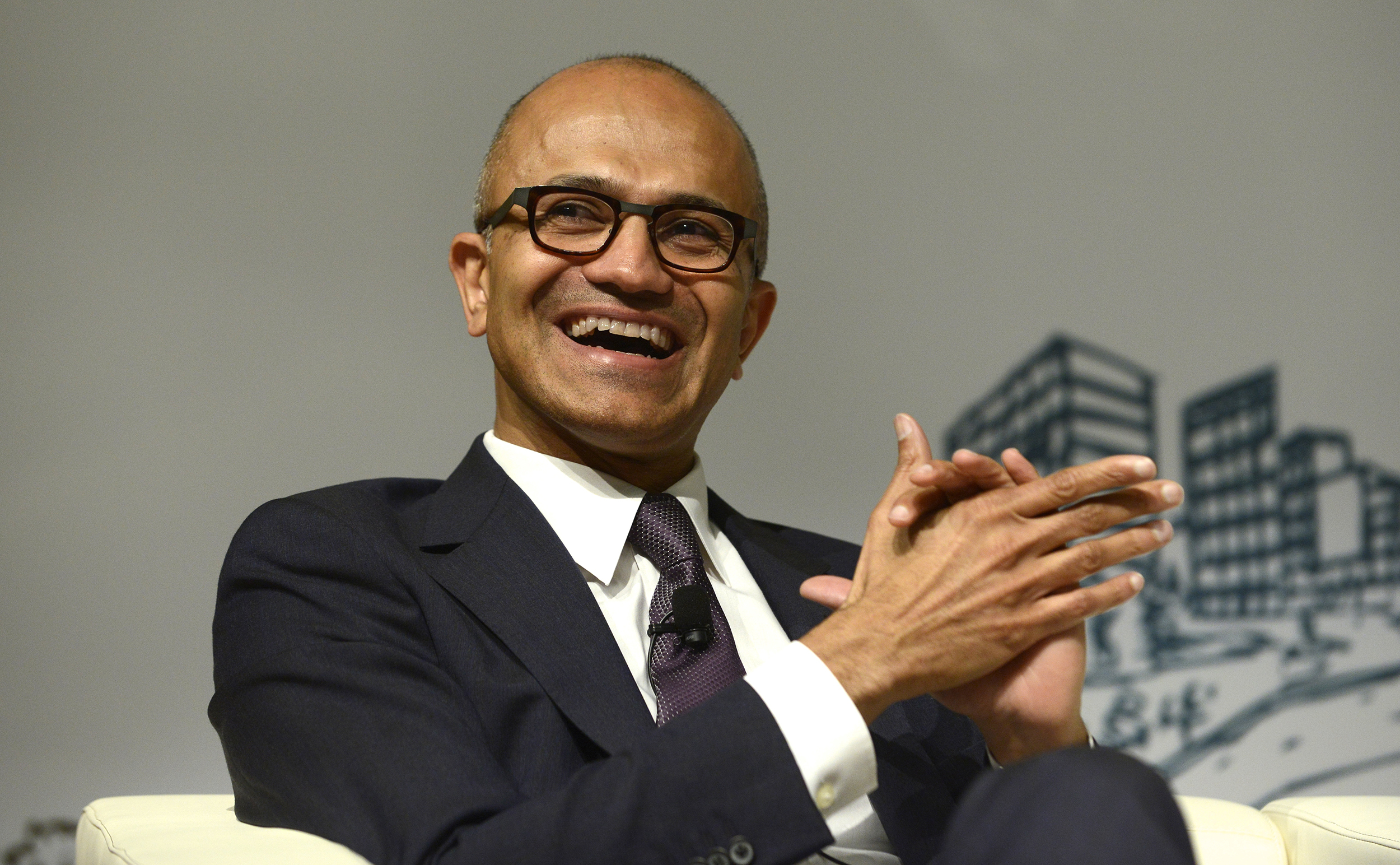 It’s Sunday evening, and Nadella is sitting in a glass-enclosed room at the back of a Japanese restaurant in San Francisco’s North Beach neighborhood, eating sushi with a few reporters. As the meal began, one reporter promptly asked “how many women report to him and how many have asked for a raise,” cutting straight to the CEO’s recent public gaffe where he advised women in the tech biz to trust “karma” if they don’t get the pay they feel they deserve, and though Nadella and his PR handlers have kept a tight lid on any discussion of this incident—and his subsequent apology—he’s somewhat freer in addressing another hot-button Microsoft issue: the Linux open source operating system.

Or at least, it used to be a hot-button issue. As Nadella says, he’s not interested in fighting old battles like the one with Linux, the rival to Microsoft’s Windows operating system that former CEO Steve Ballmer once called a “malignant cancer.” In fact, he makes it clear that Microsoft must embrace Linux—and change in other big ways—in order to compete in the modern tech world. Linux, you see, is now an enormous part of the way businesses build their websites and other online software, and Microsoft wants these businesses using its big bet on the future of information technology: the cloud computing service known as Microsoft Azure. “If you don’t jump on the new,” Nadella says, “you don’t survive.”

Part of an enormous shift towards cloud computing—a shift driven by several tech giants, including Amazon and Google—Azure is a way of renting computing power over the internet, without setting up your own hardware. About two years ago, Microsoft revamped the service so that anyone could use this computing power to run Linux as well as Windows, and though the move was hailed by pundits, many still questioned whether it would work—whether people would actually choose to run the open source OS atop a Microsoft service. But, sitting in this high-end Japanese eatery, Nadella reveals that Linux now accounts for 20 percent of all activity on Azure.

The next morning, he’ll say the same thing in public, as he lays out the broader strategy for Microsoft’s cloud computing service at an event in downtown San Francisco. “Microsoft loves Linux,” he’ll proclaim with a smile.

For those who watched Microsoft’s long battle with Linux, it’s still a surprising thing to hear, and it’s indicative of a much larger transformation at Microsoft. The company is not just running Linux atop Azure. It’s offering a version of its Microsoft Office suite for Apple mobile devices. It’s providing a free version of Windows, echoing Google’s Android operating system. It’s open sourcing many of its own software tools. And as Nadella points out, it’s partnering with rivals such as Workday and Salesforce atop its cloud services.

None of this seemed possible during the reign of Steve Ballmer, and so much of it happened on Nadella’s watch, in the months since he took over the CEO post this past February and during his time running the company’s cloud group. Nadella doesn’t take full credit for this shift. But he certainly believes it’s the best way forward for Microsoft—and it is.

What Nadella realizes is that in today’s world, businesses and engineers and consumers use such a vast array of hardware devices, online services, and software tools—and that these arrive from so many different sources: Apple, Google, Amazon, Microsoft, open source projects— and the list goes on. That may not have been the case 20 years ago, during Microsoft’s heyday, but it is now.

As Nadella says, the tech future will not be “winner take all.” And in order to win at least part of this future, Microsoft must concede as much as it takes.