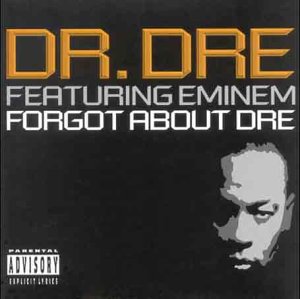 Nowadays everybody wanna talk like they got somethin’ to say
But nothin comes out when they move their lips
Just a bunch of gibberish
[They] act like they forgot about Dre.

Brand management for rappers is relatively straight-forward: if someone disses you in their lyrics or out of them, you write an even more clever lyric to dis them right back. Audiences will vote for the better rapper with their dollars.

If only corporations and CMOs could issue biting mix-tapes to defend themselves against their critics! What might such a defense look like?

Y’all know me, still the same Mickey D’s,
I been low key since SuperSize Me,
Hated on by Spurlock’s Gs.
But who gave you Big Macs,
Happy Meals an’ pancake stacks,
Chicken nuggets an’ BBQ snacks?
Yeah — you got somethin’ to say?? Shut yo traps!

On the other hand, perhaps it’s a good thing that CMOs don’t make mix tapes.

The online world is the Wild West when it comes to managing brand reputation. In the past, a disgruntled customer might tell a few friends about his bad experiences; these days, he publishes his experiences on his blog or on YouTube for the whole world to see. If he’s clever enough or influential enough, one blog post or video can go viral, and the brand quickly becomes the day’s laughing stock. Social media is great when it works in a brand’s favor; when it works against a brand, it can be a PR nightmare.

1. Keep an ear to the ground to detect upcoming waves of negative press;
2. Control where negative comments fall on the search engine results page (SERP);
3. Fight fire with fire by responding to negative comments swiftly and definitively.

Keeping an Ear to the Ground

The easiest way to find out what’s being said about a brand and what message about that brand is dominating is to run a Google search. However, a Google search only reveals what has already surfaced to the top of the conversation; to detect a negative trend before it starts, marketers should take advantage of “early alert systems”.

Google, Google News, Yahoo, Technorati, and other sites offer easy ways to monitor the ongoing online conversation. For instance, “Rob’s Pet Store” can set up a Google News alert so that the owner will receive an email whenever any news story that appears with the keywords “Rob’s Pet Store” appears in the news. Technorati lists popular tags used in the last month, as well as a daily list of Top 100 posts across the internet.

Google Alerts is one of the simplest of these tools to use. It allows users to set up a list of keywords for Google to monitor, and allows the user to choose which internet channels to monitor (i.e., blogs, video, news, forums, etc). Smart marketers will set up a few Google Alerts to monitor what’s being said both about their own brand and products, as well as competitors’ brands and products. This “early alert system” allows marketers to spot trouble for their brand’s reputation before it becomes unmanageable, and respond to problems immediately.

Any given website domain can only take up two or three search engine results, leaving about a dozen other results that may feature competitors’ websites or negative press. However, marketers can control more real estate on the SERP by using the following strategies:

1. Create multiple domains – for example, instead of relying only upon MyDomain.com for traffic, add Blog.MyDomain.com, Careers.MyDomain.com, News.MyDomain.com, MyDomain2.com, etc. Each of these alternate domains should contain proper SEO content with links back to the main domain.

2. Optimize press releases — any press release published online should be optimized and contain links back to the main domain.

3. Crowd out negative comments with positive ones — for example, when Domino’s Pizza faced a YouTube video featuring employees doing some naughty things to pizza, they responded with multiple positive YouTube videos of their own, pushing the bad video down in the search engine results (Source: iMediaConnection.com http://www.imediaconnection.com/content/26309.asp).

In 2009, a Southwest Airlines plane had to make an emergency landing in West Virginia due to a huge hole in their fuselage. One of the most frightening possible events happened on the plane: after a loud POP!, the oxygen masks came down.

Internet-savvy passengers knew what to do – turn to Twitter. Within hours, photos taken by phone appeared online – a public relations disaster in the making (Source: AirCrewBuzz.com). However, Southwest knew what to do, too. They responded to social media conversation with social media of their own. First they tweeted about their official press release, then they followed up with another tweet stating that all their planes were inspected overnight, and finally they tweeted again to say that all the passengers on the holey flight were being fully refunded.

Too often, marketers feel like the social media conversation is outside their control, leading many to avoid that conversation altogether. For better or for worse, though, Facebook has enough users (500 million) that if it were a country, it would be one of the most populated in the world. Social media can no longer be ignored, so marketers instead should take an, “If you can’t beat ’em, join ’em” attitude, while simultaneously monitoring and controlling the Facebook, Yelp, and Twitter tittering.

By monitoring the online conversation about their brand, controlling search engine real estate, and responding swiftly to any negative press, CMOs can successfully manage their brand’s reputation on the internet. Although the internet is still the Wild West for now, CMOs can appoint themselves as Sheriffs, and reign in the evildoers – not unlike Sheriff Dr. Dre and his Deputy Eminem reigning in those misbehaving, dissing rappers:

I told ’em all, all them little gangstas
Who you think helped mold ’em all?
Now you wanna run around talkin’ ’bout guns like I ain’t got none
What you think I sold ’em all?