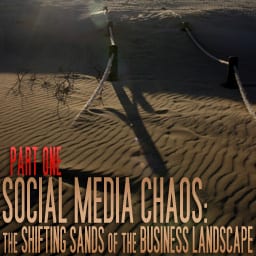 This is Part 1 of our 2-Part series on Social Media Chaos.

In “Part 2: Social Media Chaos: How To Manage The Chaos”, we present six tips for managing the chaos. The Part 2 link is at the end of this article.

When it comes to rapid changes in business technologies and social media, the numbers are so outrageous that they’re simply mind-numbing. Since we’re constantly bombarded with all the latest social media stats, let’s go way back to the 2008 viral video “Did You Know?”. This video gives viewers a taste for just how quickly things have changed. Some of the facts the video presents include (remember this is 2008):

Perhaps the most striking point made by the Did You Know? video is a point it didn’t even mean to make. In 2008, the video cited the 200 million users of MySpace and barely even mentioned Facebook. Today, MySpace is almost a has-been; Facebook, for its part, has enough members to make it the third most populous nation on Earth – another mind-numbing statistic that most of us can’t even conceptualize.

Today, four years after the Did You Know? video, almost all businesses recognize the need to participate in social media. A Forbes Insights/Weber Shandwick study found that a full two-thirds of CMOs see social media as “critical” to brand success; the same study estimates that in three years 65% of a brand’s reputation will be attributable to online sociability. (Source: Forbes Insights and Weber Shandwick

However, to be successful, businesses must find ways to manage the ever-evolving social media chaos. In “Part 2: Social Media Chaos: How To Manage The Chaos”, we present six tips for managing the chaos. But before you jump to Part 2 (link at the end), read on.

Experts on what works in social media say that businesses fail when they give in to the urge to “follow” whatever the latest trend in social media is without pausing to develop and maintain a coherent social media strategy. With marketing execs rapidly coming and going from SMEs, social media practices become inconsistent and trends are pursued without being measured.

Melrose Jewelers, a high-end online jewelry retailer, proved the value of precision in their social media strategy. The multi-million dollar company of seventy employees took the time to think their way carefully through their social media position. As a result, their Facebook fan base increased over 600% in one year, generating an additional $2 million in sales.

How did they do it? Melrose Jewelers succeeded for these basic reasons:

#2 – They tailored a precise offer to that audience – Knowing their audience was upwardly mobile but price-sensitive, the company’s promotions were all about the Benjamins: Just for signing up to be a Facebook fan, new fans got a $75 credit towards a purchase.

Instead of being tempted to recklessly pursue the various chaotic social media trends, learn from the success of Melrose Jewelers. Strategize social media campaigns around three fundamental questions:

1. Who is my audience – precisely?
2. What can I give to my audience via social media – precisely – that will be of value to them?
3. How will my brand fit in with my audience’s identity?

Shakespeare couldn’t have written a better drama than the marketing environment social media has created. If the Bard had penned such a drama, the chaos would unfold in three distinct acts:

Act One: Whereupon social media arrives on the shores of the business world and some fail to welcome the newcomer.

Act Two: Customers choose to snub even the strongest and bravest of advertising campaigners, turning instead to vigorous young Internet denizens savvy with social media.

The waning influence of traditional, top-down advertising means that many marketing departments are being forced to completely reinvent themselves. Such a paradigm shift means that demand for social media talent is huge, but there’s not yet enough talent to go around.

Act Three: Our marketing heroes struggle to judge the outcomes of their valiant efforts.

Even those marketing departments that have taken the time and effort to implement strong social media strategies still aren’t exactly sure how to measure their success… or lack thereof. CEOs everywhere are asking their CMOs, “How is your social media strategy impacting our bottom line?”, leaving many CMOs to stare at their feet and answer, “Uh…”

The chaotic marketing environment created by social media can still be navigated by the savvy marketing professional; and in “Part 2: Social Media Chaos: How To Manage The Chaos”, we present six tips for managing the chaos.

Post your comments. Tell us what you think about social media chaos below.