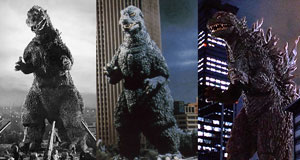 To traditional advertising agencies, staring into the face of the world of Internet marketing must be like looking into Godzilla’s gaping maw. Already, Godzilla has gobbled up newspaper advertising: PricewaterhouseCoopers reported in June 2010 that the Internet passed newspapers by as the second-largest advertising medium in the US.

With Newspaper’s bloody guts strewn across the walls, Television must now be screaming. Godzilla already ate Television in the UK; if new-school creative agencies have anything to say about it, Television as a primary advertising venue will be the next morsel on Godzilla’s menu.

Just like a damsel in distress, Andy Nibley, former CEO of old-school ad agency giant Marsteller, cried out, “First the news business, then the music business, then advertising. Is there any industry I get involved in that doesn’t get destroyed by digital technology? (Source: New York Observer).

“Marketing in the future is like sex,” Jon Bond says, the cofounder of Kirshenbaum Bond Senecal + Partners. “Only the losers will have to pay for it ( Internet Marketing ).” (Source: MissionParadox).

What Jon Bond understands about Internet Marketing might be what Andy Nibley realized too late. In a marketing environment in which “going viral” is the catchphrase of the day, the Mad Men-style agencies of yesteryear don’t move fast enough to keep up.

Think of the old-school advertising agencies being like the Soviet army. They’ve got the money, the tanks, the manpower. Now think of the new-school, internet-savvy, Facebooking, YouTubing, blogging creative companies like the mujaheddin. They travel light. They know the terrain. They can ambush a tank with an IED and slip back into the village undetected before the Soviet general can even finish scratching his goatee in confusion. They’re best-suited to excel at Internet Marketing.

In the brave new world of Internet Marketing, all the money, Hollywood talent, and professional film studios in the world can’t compete with a clever, low-budget YouTube video that goes viral. The new-school Internet Marketing troops are natives to the online terrain; while old-school ad agencies continue to spend millions on prime time TV spots that Tivo users fast-forward through, new-school Internet Marketing troops spend just thousands on online videos that they can tweak and send out to hundreds of distribution channels. One creative online video that goes viral will capture more eyeballs than a typical TV commercial ever could.

The result of all this YouTube, social marketing and Internet marketing cleverness is that a bunch of 30-somethings wearing jeans and baseball caps are making the suits on Madison Avenue feel like they belong on AMC.

Internet Marketing: Google is My… Frenemy?

It’s not just the kids in jeans making the Mad Men feel a little stupid. In a “Do Androids Dream of Electric Sheep?” twist, it’s the software itself that’s out-dating the agencies. With a few lines of copied-and-pasted code into the header of their HTML, any Joe Schmo website owner can track visitor statistics like an expert.

Tracking software like GoogleAnalytics, together with the powerful tools offered advertisers in AdWords, take away the need for expensive “market analysis” that ad agencies used to get paid big bucks for. With the few clicks of a button, Google’s software tells advertisers exactly which keywords they should use, then with a few more clicks it they can see which ads led to sales and which didn’t. There’s no more need to say “Mention this ad for 10% off” as a way of tracking the ROI of advertising dollars; Google tells you – and it tells you for free.

Google might be the undisputed king of the Internet hill for now, but don’t expect it to last once the slightly Napoleonic Mark Zuckerberg’s plans for world domination go into full swing. Founding Facebook from his Harvard dorm room back in 2004, his social networking website actually overtook Google as the most popular website in America for the first time in the spring of 2010 (Source: TechCrunch.

Zuckerberg was named Time’s “Person of the Year” for 2010 for a good reason: social media, social media marketing and Internet marketing are completely changing the world. Railroad networks in the 19th century changed the face of commerce and human interactions forever; social networks are doing the same thing in the 21st century. Nowadays, companies don’t list their website address at the end of a TV commercial, they list their Facebook address.

The creative agencies who know how to leverage Facebook, Yelp, Endgadget, YouTube, and other social media sites to make marketing efforts go viral are the agencies that will make money for their clients and tame the Godzilla-like world of Internet Marketing.

The creative agencies that don’t know how to do Internet Marketing…? Well, maybe AMC will do a casting call soon for the next season of Mad Men.

The Internet as Elder Wand: It’s the most powerful marketing tool ever created – that is, if a Marketing Wizard can wield it – Another powerful article on Internet Marketing from 4thWeb.